Recently some common wasps took exception to my GoPro camera

This wasn't a large nest by any means

They left my camera drenched in wasp venom.

There is nothing like a mad swarm of irked hornets or yellow jackets hot on your tail. It’s scary and potentially painful and for those with allergies, life threatening.1 There are some who prescribe to the school of search and destroy – that eliminating wasp nests at all costs is the best approach. And obviously if they present a clear danger, that’s understandable. But what many people don’t realize is that these weaponized insects happen to do a lot of good, despite their ability to inflict a bit of agony now and then.

There are many thousands of identified species of wasps, and although we are most familiar with the ones with whom we do battle at picnics, there are many that do not sting.2 Wasps come in two styles, social and solitary – and in fact, most varieties are solitary and non-stinging. Colony-building social wasps, like hornets and yellow jackets, make up around 1,000 species.
But the remarkable thing about wasps is this: Nearly every pest insect on the planet is preyed upon by a wasp species, either for food or as a host for its parasitic larvae.3 Wasps are so adept at controlling pest populations that the agriculture industry now regularly deploys them to protect crops.

From flies to beetle larvae to every kind of garden pest that vexes, it’s likely that their numbers are controlled by wasps.4 Plus, wasps offer some pollinating services as well.5 While not as effective at getting pollen from one place to another as bees, wasps still do their best.6 And some species are rock stars when it comes to pollinating – fig wasps, for example, are responsible for pollinating almost 1,000 species of figs.

It behooves us to do our best to get along with wasps, and part of that is better understanding their behavior. Social wasps in distress send out a pheromone that is like a 911 call to the nearby colony; the result is a swarm of pissed-off wasps in an aggressive frenzy.7 (See more about that in the video below.)

So the best thing to do is to avoid angering even a single wasp. The UC Davis Integrated Pest Management program offers these tips to avoid bees and wasps, noting that unless a person collides with or swats one, they are unlikely to sting (and/or get mad and send out a call to the troops) 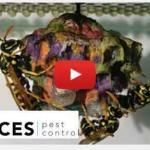 Best leave the wasps to the professionals