Pest borer control  Auckland   starts with an inspection. Borer is a beetle that can potentially destroy the structure of your building. There are different types of wood eating beetle including the longihorn beetle and long toothed borer, but the furniture borer beetle is the most common. Borer beetles are on the wing typically in January through to March.

Woodboring beetles most often attack dying or dead trees. In forest settings, they are important in the turnover of trees by culling weak trees, thus allowing new growth to occur. They are also important as primary decomposers of trees within forest systems, allowing for the recycling of nutrients locked away in the relatively decay-resilient woody material of trees. To develop and reach maturity woodboring beetles need nutrients provided by fungi from outside of the inhabited wood. These nutrients are not only assimilated into the beetles' bodies but also are concentrated in their frass, contributing to soil nutrients cycles.[4] Though the vast majority of woodboring beetles are ecologically important and economically benign, some species can become economic pests by attacking relatively healthy trees (e.g. longhorn beetle, borer) or by infesting downed trees in lumber yards. Species such as the longhorn beetle and the  borer are examples of invasive species that threaten natural forest ecosystems.

Woodboring beetles are commonly detected a few years after new construction. The lumber supply may have contained wood infected with beetle eggs or larvae, and since beetle life cycles can be one or more years, several years may pass before the presence of beetles becomes noticeable. In many cases, the beetles will be of a type that only attacks living wood, and thus incapable of "infesting" any other pieces of wood, or doing any further damage.

Genuine infestations are far more likely in areas with high humidity, such as poorly ventilated crawl spaces. Housing with central heating/air-conditioning tends to cut the humidity of wood in the living areas to less than half of natural humidity, thus strongly reducing the likelihood of an infestation. Some species will infest furniture.

Some beetles invade wood used in construction and furniture making; others limit their activity to forests or roots of living trees. The following lists some of those beetles that are house pests. 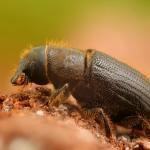 PEST CONTROL AUCKLAND WHAT IS BORER

Borer is a beetle which belongs to the order Coleoptera. Coleopterans are the most common type of insect in the world, with the highest numbers in terms of mass and species.

This fact combined with the observation we don't really see a lot of beetles, is said to mean they are in areas we can't see. Examples of this would be beetles inside trees, foliage, detritus and food.

They think there are so many small beetles in the raw materials for food e.g. flour that they get incorporated into our food without us actually knowing. A little extra protein never hurt anyone!

We have completed a Post Graduate Qualification in Timber Pest Management with Protrain in 2019.

HOW DO I KNOW MY PEST BORER IS ACTIVE IN AUCKLAND?

You need to look for the Borer holes.  When borer larvae is active frass comes out of their holes. Frass has a distinct colour of yellow/orange.

BORER TREATMENTS IS MY BUILDING/HOUSE SUITABLE FOR A TREATMENT?

We provide treatments for naked wood in  sub floor areas and ceiling spaces.

before a treatment you will need to do the following,

The treatment we use kills the wood eating larvae. It takes up to nine months to have an effect on the borer.

We use Sodium Borate to stop the larvae from eating the wood in your house. Sodium Borate is applied to the bare or naked wood. The aim is of the treatment is to soak the solution 5mm into the exposed wood. This achieved by applying 2-3 copious applications with one hour between applications.

Once the wood in your house has been treated for Borer, the treatment remains there indefinitely protecting your house against wood eating insects.

The treatments take between one and two days. The main reason for long time of the treatment is the multiple coats and the rest period in between them.

ACES pest control has specialist gear for applying Sodium Borate. This includes a 100 litre tank which is powered by a battery. We also have 50 metres of piping to reach inside even the largest house. This provides a constant and even flow of Sodium Borate solution. A strong motor and battery allows the solution to be pumped three stories high if needed.

Sodium Borate is low toxicity  for humans and their pets. And the treatment is locked into the wood.

Get in touch with ACES pest control Borer treatments 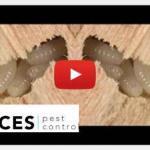 "As a Barfoot and Thompson Property Assistant, I've used Aces on multiple occasions, every time providing work of a fantastic standard.  Aces are very knowledgeable, always give an honest opinion and reasonably priced.  I completely recommended Aces and their services."