Pest control Auckland fleas, requires a good plan! Fleas belong to order the Siphonaptera and are all blood suckers. Fleas transfer disease and are famous for killing thousands of humans historically. Fleas live naturally  outside in the grass.

Fleas can live in a home or business WITHOUT a pet such as cat or dog.

1/Fleas can pull 160,000 times their own weight, which is the same as you pulling 2,679 double-decker buses. A flea can jump 30,000 times without stopping.
2/Fleas don't have ears and are virtually blind.
3/The average flea is between2mm and 3mm long and weighs about 0.03g.
4/The world's biggest flea is the beaver flea, which is about 11mm.
5/Fleas reverse direction with every jump.
6/Flea larvae don't like the light so they move away from it, deep into carpets, cracks in flooring or any nook or cranny.
7/When a flea jumps, it accelerates 50 times faster than a space shuttle.
8/Fleas can lay up to 1,500 eggs in their lifetime.
9/Flea brides and grooms (dressed, but dead) were popular collector's items in the 1920s.
10/Flea pupae can live for up to one year in homes.
11/Fleas can jump over 150 times their own size (approximately 30cm high) - which is like you jumping the length of a football field.
12/A flea's life cycle can be as short as 14 days or up to 12 months.
13/95% of flea eggs, larvae and pupae live in beds, rugs, carpets and sofas – not on your pet.
14/Just one flea can become 1,000 on your pet and in your home in only 21 days.
15/Flea circuses originated in England in the 16th century.
16/One of Britain's oldest games can trace its origins to the flea. In approximately 15 different European languages, the word 'tiddlywinks' translates as 'the game of the flea'.
17/In nearly all species, the female is larger than the male.
18/The collective name for a group of fleas is a swarm.
19/Sand fleas are only active at dawn and dusk.
20/Fleas can be frozen for up to a year and then revive themselves. 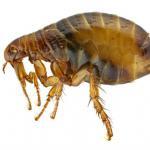 HOW A FLEA TREATMENT WORKS

Often the first thing customers show us are cans  empty flea bombs. They tell us that the fleas went away then came back. They then ask what is a flea exterminator  going to do that's different? We explain that your flea bomb did actually kill all your fleas, but didn't TAKE OUT  the cocoon part of the flea life cycle.

Please see our diagram to left of the page.

Our treatment for fleas is different from a flea bomb by 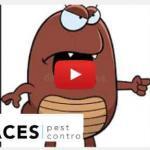 Our flea treatments spray the floor surfaces with particular attention to the areas where the "host (s) " sleep. This often means spraying around and under beds. Please note we do not treat beds, linen or the customers clothing. A customer can treat their linen by doing a hot wash and hot dry with their sheets. A flea treatment is quick and commonly takes less than 30 minutes to complete. 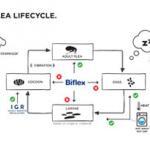 Customers ask are our treatments child safe, baby safe, dog safe and cat safe? Our treatments for fleas are very low toxicity to humans, children, cats and dogs. We use our flea treatments in a safe method.

PEST CONTROL HOW LONG DOES A TREATMENT LAST?

Reviews are a great way of seeing how people react to service or product. ACES pest control has recent reviews from local Auckland customers.  Our 200+ Google reviews  are  REAL | RECENT | LOCAL  . In fact if you choose ACES we will invite you to review us too!

DIY flea bombs have a number of reasons they don't work. Firstly the home DIYer doesn't have the experience or gear to complete an effective spray treatment. Secondly there's no DIY product that treats the cocoon stage of the flea life cycle. Thirdly the EPA restricts the dosage of DIY products to ineffective levels and also restricts the sale of the most effective chemicals to the public.

Get your neighbors together and we can offer a discount off the normal price. Please note the treatments must be on the same day and after or before each other.

FLEA TREATMENTS WHAT DO I NEED TO DO?

Before treatment take as many items off the floor as possible. Should you be concerned about your linen or clothes please hot wash and hot dry these on the day of treatment. Please treat your dog or cat with a product your vet recommends on the day of treatment.  Use your vacuum and hoover the night before as we will ask you to reduce vacuuming for the next two weeks.

Please note we only treat fleas inside dwellings or houses. We do not offer a service to  treat fleas outdoors.

"ACES Pest Control came out to us on a Sunday to help us with fleas in our house.  They gave us very good information about the treatment they would use and what we should expect before and after the treatment.  Highly recommend - very reliable."