Pest  mice are a common in homes and businesses.

12 fascinating facts about mice you need to know this winter!

1. Mice can squeeze into tiny gaps

By flattening out their bodies, mice are able to squeeze through gaps as small as 6mm. That’s roughly the size of a pencil!

Because of this, when it comes to preventing mice, it’s advised that you fully inspect your property for any gaps and holes and fill these in using expanding foam or wire wool.

For anyone that’s read the comics or watched the Netflix show, you’ll know that due to his lack of sight, the superhero Daredevil’s other senses are heightened beyond normal human ability.

Well this is something mice have in common with the Marvel superhero from Hell’s Kitchen. Due to their poor vision, mice rely on their other sense such as smell, hearing and touch to get around.

I don’t know about you, but I hate the cold, especially at night time. And well, mice are no exception.

During the autumn and winter months, mice like to squat in your homes and businesses to escape the cold and find somewhere warm, with lots of food, to see through the cold times ahead.

Mice see best in dim light, but as you know this doesn’t really affect them as their other senses make up for it.

Mice, much like other rodents, have a set of incisor teeth that never stop growing. Their teeth grow at a rate of 0.3mm a day!

Because of this, mice have to constantly gnaw on items which range anywhere from cardboard boxes to wires and furniture in order to grind their teeth down to a reasonable length.

A mouse’s hearing is superb compared to ours. Research shows that mice can hear ultrasound up to to 90kHz!

To add to this, they also use ultrasound to communicate with one another and even serenade each other with love songs.

7. Mice are amazing at high jump.

Ok, so not only do they have superhuman hearing, but they can also jump to incredible heights!

Mice have been recorded to jump to a height of around 25.4cm. Considering their average size is between 3 and 10 cm, that’s impressive!

8. Mice are fantastic climbers
On top of their impressive jumping skills, mice are also amazing at climbing!

Not only do they have amazing rope-climbing skills, but they can also scale any rough vertical surfaces up to 2 meters high!

9. Mice have OCD when it comes to traveling.

Although they are amazing jumpers and climbers, mice do have peculiar traveling tendencies. This may sound a bit strange, but mice like to travel adjacent to walls and along edges.

Like some of the great explorers of our time, mice are keen adventurers. On a daily basis, they like to explore their territory for any potential food sources available.

There’s one thing mice and I have in common, that’s the fact that we both love food!

Mice are omnivorous and will pretty much eat near enough anything they can get their hands on; they also like to stop off at numerous food stands during their adventures to sample the local cuisine.

On an average night, mice make between 20 and 30 visits to different food sites taking as little as 0.15g of food from each location.

As you now know because their teeth constantly grow, mice have to gnaw and chew on items to grind them down to a comfortable size.

A downside to this is that it can often include items such as electrical wires, which in turn can lead to electrical fires and other damaging possibilities. 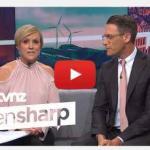 While they are reasonably easy to kill with bait or traps they are so prolific and rapid breeders making them hard to completely exterminate.

A common question is do I only have one mouse. The answer is mice run in groups, so most likely you have more than one. 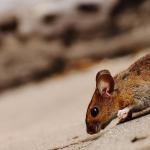 MOUSE FUMIGATION AUCKLAND HOW IT WORKS

Pest control Auckland mice requires an inspection to acquire three key areas. At the 2016 NPMA we attented Dr Bobby Corrigan's RODENT Academy course to inspect and find three key areas. Access points, trails and nests.  Once these three key areas are found we will exclude you, your family and pets from our controls. 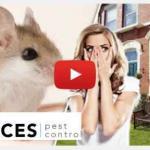 MICE ERADICATION AUCKLAND HOW LONG DOES IT TAKE?

The time it takes to do a job depends on the size of the home or business and what's involved. A three bedroom home takes an average of  40 minutes.

Some jobs may take longer, especially businesses,  depending on what needs to be done.

At ACES pest control we use  exclude  you, your family and pets from controls. Or we use controls in an excluded area where you dont have access to.

Mice themselves present a much greater risk to your safety as they spread disease. An uncontrolled mouse infestation will result in your and your family eventually becoming seriously ill!

Doing DIY you're up against it with mice! DIY baits are often not palatable to the rodents. This often results in the mice not taking enough of the bait and dying inside your home or business.

And there are often a lot of mice. Can you be certain you have got them all? Remember their breeding cycle is quick, just miss one and it all starts again!

PEST CONTROL AUCKLAND HOW LONG DOES IT LAST?

When we have completed the inspection we will know the access points, trails and nests of the mice.

We are happy to share this with you, so you can consider making some changes to stop this happening again.

Remember a mouse only needs a gap of your little finger to enter your home!

When considering a product or service reviews can be a useful to see what customers think. See our   220+ Google reviews that are all REAL | RECENT | LOCAL.  If you choose ACES we will ask you to review us too!

For the best deal get your friends and neighbors together and we can give you a discount from the normal price. Please note that treatments need to be in the same area and at similar times.

Get on contact with ACES pest control regarding mouse extermination Auckland

"Aces only came once and the other pest controller, nice as he was came for months and months and we still had mice . . .  We don't have mice anymore, which is AWESOME."