Flies all belong to the order called Diptera.  There are many different types of flies with four  pest flies being,

Below is a list of facts about flies you need to know.

Yes, that’s correct. Flies tend to live off a diet based on liquids. Why? Well, that’s just how they are built. See, they lack the mouthparts needed to chew food, so instead, they have to drink it.

How do house flies eat?

A house fly will regurgitate digestive juices onto solid foods and these juices break down the food into small pieces, allowing them to use their mouthparts, called proboscis, to drink the meal.

2. They can taste with their feet

Like butterflies, flies can taste food using their feet!

This is all down to taste receptors (chemonsensilla) being located on their lower legs and feet. When a fly lands on a tasty meal, which can be anything from animal feces to your lunch, they will often wander around to give their next meal a good taste before consuming it.

And they aren’t too worried about where they do it either!

As you know, house flies like to live off a liquid diet. Because of this, their digestive system can move quite quickly, which means they defecate often. It is speculated that house flies defecate every time they land, even if it’s on their next meal!

4. They can spread a range of diseases

Due to their feeding and breeding habits (more on that later) house flies come into contact with a range of harmful bacteria such as Salmonella and E.coli. Because of this, house flies will often aid the spread of these bacteria passing them onto us by contaminating things, such as food and cooking utensils.

5. House flies can walk upside down

Let’s face it, you probably already knew this one.

The anatomy of a house fly enables it to walk and climb on most surfaces no matter if it’s horizontal, vertical, or even upside down.

This is due to each foot containing two fat foot pads (called pulvilli) which contain tiny hairs that produce a glue-like substance made of sugars and oils which provides them with excellent grip, perfect for scaling any surface.

6. Flies are able to see behind them

That’s right, house flies can see behind them and it’s all to do with their amazing eyes.

Unlike human beings, house flies have compound eyes. These intricate eyes provided them with nearly a 360-degree field of view, which allows them to see behind themselves. Unlike ours, the eyes of a house fly don’t move. Being able to see in all directions allows them to navigate while also being on the lookout for danger.

7. The lifespan of a house fly isn’t that long

On average, the life cycle of a house fly only lasts for around 30 days, which means they don’t live for long at all.

However, in their short lifetime, they manage to accomplish quite a lot. House flies can lay up to 500 eggs in their lifetime which are usually in batches of around 75 to 150. So, although they don’t live long, an infestation can quickly arise through new generations.

Ever wondered why it’s so difficult to swat a fly? Well, it’s pretty much down to their quick reaction times and their agility.

House flies are able to process what they see and react accordingly at amazing speeds. To put things into perspective, our brains process around 60 images a second, whereas a fly can process around 250 in a single second.

9. They have unhygienic breeding habits

House flies aren’t really fans of rushing to the hospital to give birth. Their chosen method is rather disgusting as well.

House flies will lay their eggs on items such as feces, rotting carcasses, and decaying fruit. Why is this? Well, it’s mainly to provide the larvae (maggots) with something to eat when they hatch.

10. Male house flies are constantly looking for a date

Remember, in Fact 6, when we discussed the compound eyes of a fly? Well, they also play a role in how houseflies find a partner.

Studies show that there’s a specific region within the eyes of a male fly called the "love spot." It is pretty much used for detecting and chasing female flies. This "spot" is located within the dorsofrontal region of their eyes. This is typically used to detect small target motion, however, males also use it to stay “locked onto potential mates during aerial pursuit.” 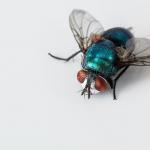 PEST CONTROL HOW IT WORKS?

A house treatment for  fly control requires an interior and partial exterior spray. We use directional sprayers inside your home so we can control where the chemicals are applied. We dont use misters inside your home as they produce very small particles. These small particles go on every surface of your home. This is the reason misters are banned from interior application in Australia and the USA.

For the smaller flies such as fruit flies and drain flies, please call or send a SMS text message to talk about your situation.

We are asked by customers are our treatments child safe, baby safe, pet safe, dog safe and cat safe? Our products are considered very low toxicity to humans.

PEST CONTROL HOW LONG DOES IT TAKE?

A fly treatment will take varying times depending on the size of the house. An average three bedroom single level house will take around 40 minutes ( estimate) .

Reviews are a good way of finding out what people think of a service and or product.  Our 220 + reviews are all REAL | RECENT | LOCAL .   If you choose ACES we will invite you to review us too!

Does DIY pest control work for fly treatments? Yes and No!!?!?!?. Mostly customers have those eco mist type units that spray chemicals into the air intermittently.

The customers say that they work but they still have flies?

Get your mates or neighbors together and we can give you a discount off normal price if the jobs are booked for the similar times in the same area on the same day.

Get in contact with ACES pest control fast fly fumigation

"100% happy with ACES Pest Control.  This is the second year we have used them for flies and guess what, there are no flies in my kitchen now.  Thanks Aces.  Great work."