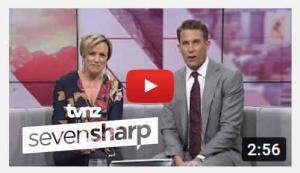 Owen from Aces Pest Control talks to Jeremy from Seven Sharp about an apparent "flying" Weevil  infestation in his pantry - which turns out to be Pantry Moth elimination auckland.

TIPS on how to get rid of Pantry moths

Indian meal moths are the most common type of moth found in pantries, particularly during the warmer months.

You may spot moths flying around your kitchen, find webbing on the surface of food or packaging, or worse still even find larvae in your flour, rice or muesli.

You could also put out a sticky pheromone trap to capture adult moths that have been flying around or hiding in corners of the pantry.

Most of the time, pantry moths arrive onboard your groceries.

"If you're concerned about a package that's come in from the supermarket or a package that you've got in the pantry, then freeze if for a couple of weeks to kill the larvae and eggs."

"Certainly, a lot of people have pantry moths at the moment, even I have them," Dr Edwards said.

Moths aren't just the dull brown cousins of our beloved butterflies. They come in all shapes, sizes, and colors. Before you dismiss them as boring, check out these 10 fascinating facts about moths.

1. Moths Outnumber Butterflies by a 9 to 1 Ratio

Butterflies and moths belong to the same order, Lepidoptera. Over 90% of known Leps (as entomologists often call them) are moths, not butterflies. Scientists have already discovered and described well over 135,000 different species of moths. Moth experts estimate there are at least 100,000 more moths still undiscovered, and some think moths actually number half a million species. So why do a few butterflies get all the attention?

2. Most Moths Are Nocturnal, but Many Fly During the Day

We tend to think of moths as creatures of the night, but this isn't always the case. Some moths are quite active during daylight hours. They're often mistaken for butterflies, bees, or even hummingbirds. The clearwing moths, some of which mimic wasps or bees, visit flowers for nectar during the day. Other diurnal moths include some tiger moths, lichen moths, wasp moths, and owlet moths.

3. Moths Come in All Sizes

Some moths are so small they're referred to as micromoths. Generally, moth families in which the member species measure just a centimeter or two are considered micromoths. But a still undescribed species collected in Africa is likely the smallest moth of all, with a wingspan of just 2 mm. At the other end of the moth spectrum is the white witch moth (Thysania aggrippina), a neotropical species with a wingspan that reaches up to 28 cm, or the size of a dinner plate.

4. Male Moths Have a Remarkable Sense of Smell

Keep in mind that moths don't have noses, of course. An insect's sense of smell is essentially its ability to detect chemical cues in the environment, called chemoreception. Moths "smell" these cues with highly sensitive receptors on their antennae. And male moths are the champions of chemoreception, thanks to feathery antennae with lots of surface area to grab those molecules from the air and give them a sniff. Female moths use sex attractant pheromones to invite potential mates to mingle. Silk moth males seem to have the strongest sense of smell of all and can follow a whiff of female pheromones for miles. A male promethea moth holds the record for tracking a scent through the air. He flew an astounding 23 miles in the hope of mating with the girl of his dreams and was likely disappointed when he realized he'd been tricked by a scientist with a pheromone trap.

5. Some Moths Are Important Pollinators

We don't often think of moths as pollinators, perhaps because we aren't outside in the dark watching them work. While butterflies get all the credit, there are plenty of moths moving pollen from flower to flower, including geometer moths, owlet moths, and sphinx moths. Yucca plants require the help of yucca moths to cross-pollinate their flowers, and each yucca plant species has its own moth partner. The yucca moths have special tentacles with which they can scrape and gather pollen from yucca blossoms. Charles Darwin famously predicted that orchids with exceptionally long nectaries were pollinated by insects with equally long proboscises. Though ridiculed for his hypothesis at the time, he was later vindicated when scientists discovered the Madagascan sphinx moth, an orchid-pollinating species with a 30 cm proboscis.

6. Some Moths Do Not Have Mouths

Some moths don't waste time once they reach adulthood. They emerge from their cocoons ready to mate, and content to die soon afterward. Since they won't be around for very long, they can get by on the energy they stored as caterpillars. If you don't plan on eating, there's really no point in developing a fully-functioning mouth. Probably the best-known example of a mouthless moth is the luna moth, a stunning species that lives just a few days as an adult.

7. Not All Moths Eat, but They Are Often Eaten

8. Moths Use All Kinds of Tricks to Avoid Being Eaten

When everything in your world is intent on eating you, you've got to get a little creative to stay alive. Moths employ all kinds of interesting tricks to avoid predation. Some are masterful mimics, such as caterpillars that look like twigs and adult moths that blend in with tree bark. Others use "startle markings," like the underwing moths that flash brightly colored hindwings to distract pursuing predators. Tiger moths produce ultrasonic clicking sounds that confuse sonar-guided bats.

Everyone loves migrating butterflies, like the famous long-distance flights of the North American monarchs. But nobody gives props to the many moths that also migrate, perhaps because they tend to fly at night. Moths tend to migrate for practical reasons, like to find a better food supply, or to avoid uncomfortably hot and dry weather. Black cutworm moths spend their winters on the Gulf Coast but migrate north in the spring (like some senior citizens). Olympic trivia buffs may remember the hordes of migrating Bogong moths that pestered athletes during the 2000 Sydney Olympics.

10. Moths Are Attracted to Light Bulbs, Bananas, and Beer

If the previous 9 facts convinced you that moths are pretty cool insects, you might be interested in attracting moths so you can see them for yourself. Moth enthusiasts use a few tricks to lure moths closer. First, many moths will come to lights at night, so you can start by observing the moths that visit your porch light. To see a greater diversity of the moths in your area, try using a black light and a collecting sheet, or even a mercury vapor light. Some moths might not come to lights but can't resist a mixture of fermenting sweets. You can mix up a special moth-attracting recipe using ripe bananas, molasses, and stale beer. Paint the mixture on a few tree trunks and see who comes for a taste.